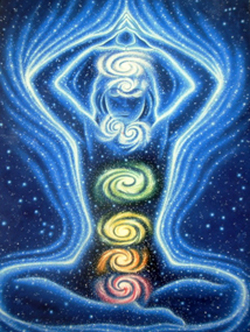 ﻿Kundalini Yoga, the mother of all yogas and the most powerful yoga known. As brought to the West in 1969 by Yogi Bhajan, it produces results 16 times faster than ordinary yoga.

Its power comes from the Kundalini, an enormous reserve of untapped potential within each of us. It is normally depicted as a coiled or sleeping serpent, located in an area towards the base of the spine.

With the practice of Kundalini Yoga you will benefit greatly from an elevation in consciousness, promotion of physical well-being and an expansion of awareness. You will feel more relaxed and at ease with yourself. Your life will be transformed into one which is happy, healthy & harmonious.
﻿
What is KUNDALINI YOGA?
Relatively new to the Western Hemisphere, Kundalini, "the yoga of awareness," opens your heart, builds strength and releases the energy located at the base of your spine. Each teacher will bring their own experience to the practice -- some much more traditional than others -- but Kundalini is without a doubt one of the more spiritual styles of yoga. Kundalini yoga focuses on breath and movement and challenges its students both physically and mentally.

ORIGINS
Kundalini is one of the oldest forms of yoga – it has been practiced by the Upanishads in India since 500 B.C. Mastering the practice at sixteen, Yogi Bhajan brought Kundalini to the West in 1969. Initially, it was never taught publicly until Bhajan challenged its secrecy and taught Kundalini openly to the public and consequently established the 3HO, which stands for "Healthy, Happy, Holy Organization."

BENEFITS
Kundalini literally means "coiled" and is represented by a metaphorical coiled snake at the base of your spine. The purpose of Kundalini practice is to uncoil your snake and release that energy within. Health, strength, fitness and overall happiness benefits are included.

GOOD FOR BEGINNERS?
There might be a bit of shock factor: no doubt, Kundalini is much different than other forms of yoga. Expect to dance, jump, hold long poses, and breathe deeply and repeatedly – no two classes are the same! It is great for beginners as it has the flexibility to push past your comfort zone as well as offering the ability to go at your own pace.

WHAT TO WEAR?
Clothing made to move! There is an almost cardio-like aspect to Kundalini yoga, and you're going to want to make sure you're wearing clothing you can breathe and move in to avoid restriction in your practice. Also, make sure to look into the nature of the Kundalini class you are attending: some of the more traditional practices require you to wear exclusively white-coloured clothing.

WHAT TO BRING.
Bring along a water bottle, your Yoga mats and towels for sweat.
Blocks, blankets and pillows are provided

WHAT TO EXPECT.
Kundalini yoga varies from practice to practice. All classes will begin with an opening chant and expect to finish with deep meditation, a closing chant and a song. Expect to focus on your breath (specifically "breath of fire", where air is sucked in and out rhythmically) and to move, dance and let go. Kundalini has the power to unleash and unlock barriers within ourselves that is supremely joyful and serene.
www.nudgetraining.com, Travel Adventure Training